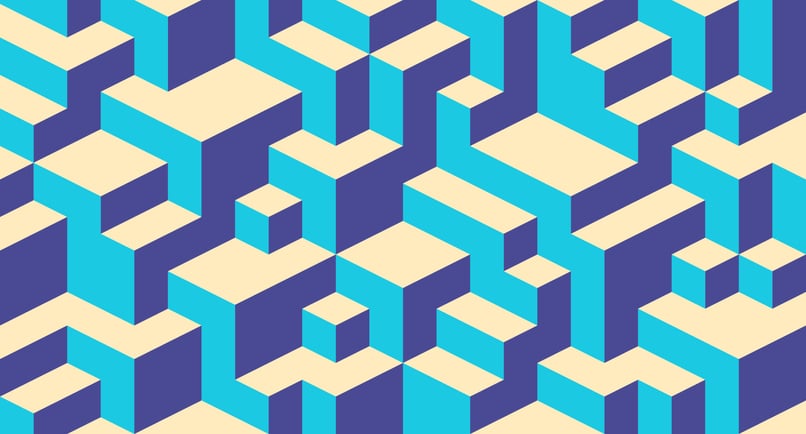 In its short lifespan, blockchain has already shaken the foundations of the global financial system and completely upended how trust is built and secured online.

Soon, it  may even transform how the construction industry does everything from envisioning projects to managing supply chains and tool inventories.

You may have heard it in reference to Bitcoin, but even then, odds are high that the meaning of the word “blockchain” remains elusive to you.

So what is blockchain? And what does it have to do with the world of construction?

The simple answer is that blockchain is a relatively new form of computer software that automatically shares, tracks, stores, encrypts, and authenticates various types of online objects, transactions, and data in real-time. 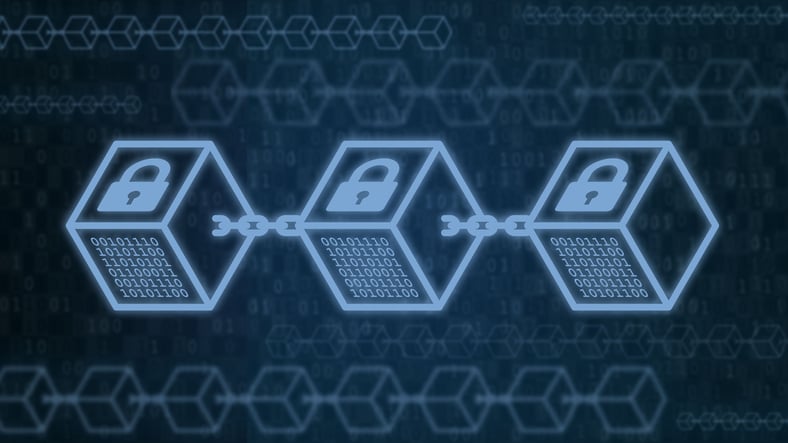 Blockchain is like a database that can be accessed by multiple users at the same time. Unlike a database, however, blockchain doesn’t rely on any company, institution, or governmental body to support it. Instead, the blockchain “lives” exclusively on networks of otherwise unaffiliated devices, generating a decentralized digital ledger that is transparent to all its users yet extremely difficult to tamper with.

This is what makes blockchain a compelling instrument for those interested in creating “trustless” accountability structures that don’t rely on central authorities or gatekeepers of information: On the blockchain, records of any and all transactions that occur are verified by consensus and are plainly visible in real-time to any and all parties who use the software.

Are blockchain and Bitcoin the same thing?

No, Bitcoin is actually just one example of a type of application that can be built with blockchain. The confusion is understandable, however, as the two ideas have been intertwined since birth.

The blueprint for the blockchain first emerged in an infamous 2008 white paper by Satoshi Nakamoto, an individual or group of individuals whose identity remains unknown to this day.

In the paper, Nakamoto envisions the blockchain as the key to unlocking a radical alternative to central banking: A “purely peer-to-peer version of electronic cash” that “would allow online payments to be sent directly from one party to another without going through a financial institution.”

Nakamoto called this electronic cash Bitcoin, which he/she/they launched the following year, fueling the meteoric rise (and fall) of a whole galaxy of other cryptocurrencies including Ethereum, Dogecoin, and non-fungible tokens (NFTs).

As heavily associated as blockchain is with these disruptive forms of online finance, the technology has also made a variety of other applications possible.

We’ll discuss a few of them in a moment. But first, let’s take a closer look at how a typical blockchain works

How Does Blockchain Work?

Blockchains are a complicated topic that can be discussed in varying degrees of complexity. For our purposes, we need only have a basic understanding of some root terms and concepts.

Let’s start at the beginning. 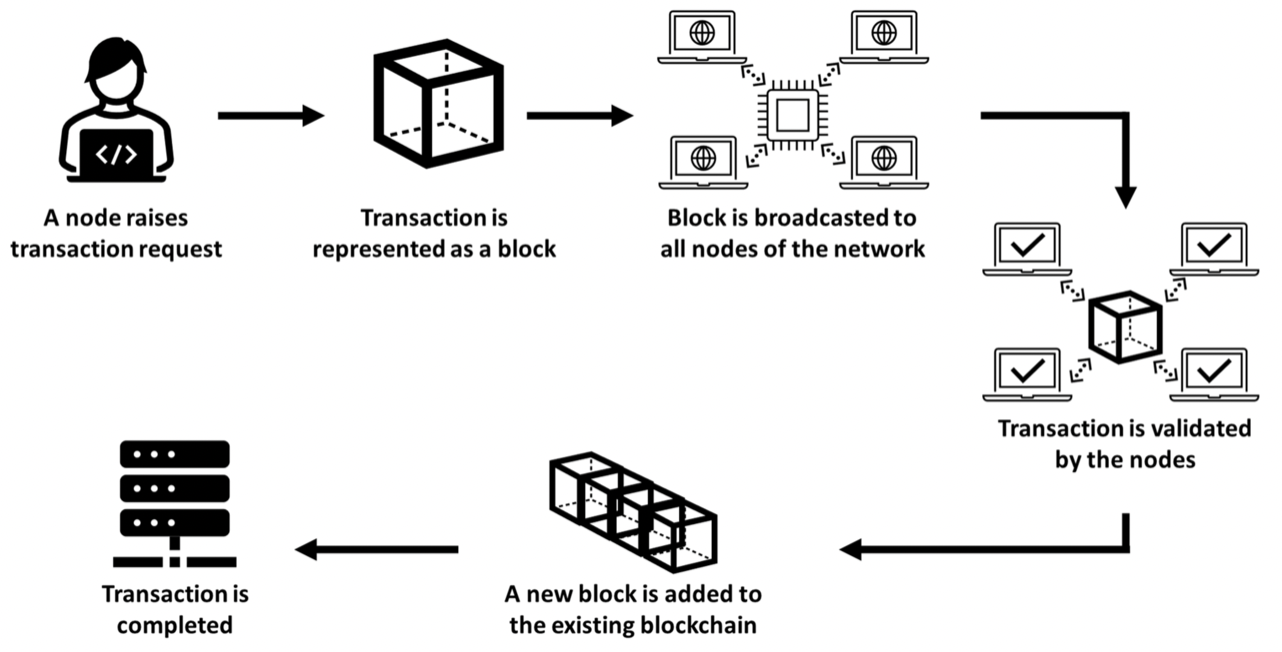 Blockchains run on distributed networks of computers, or “nodes.”

Each node contains a complete copy of the blockchain and has equal access to every piece of information stored within it. Anyone can transform their computer into a blockchain node simply by downloading the blockchain software.

Anytime someone makes a transaction or sparks an event within the blockchain it is recorded as a “block.”

Every block gets added onto a chronological “chain” of other interlinked blocks. Each block contains an imprint or “hash” of itself and every other block that has come before it.

This nested cryptographic structure–hash, block, chain, node–is highly resistant to tampering, as falsifying a single block registers as a discrepancy within the complete set of interconnected hashes on the other blocks. Getting away with attacks on a blockchain is therefore nearly impossible, as doing so would require the painstaking decryption and falsification of every prior and subsequent block within the chain.

It’s important to understand the differences between them because each is suited for different types of applications.

In the world of construction, the blockchains that are most likely to be used are permissioned.

6 Possible Uses of Blockchain for Construction

Blockchain can be used for more than mining cryptocurrencies and minting NFTs.

Now that we have a clearer understanding of what blockchains are and how they work, let’s take a look at how they can be used in construction.

The transparent peer-to-peer nature of the blockchain makes it an ideal tool for organizing big data and building trust into business relationships from the start.

In a “smart contract” running on the blockchain, users can rest assured that all of their transactions and agreements are faithfully executed down to the most minute detail.

Though not yet widespread, smart contracts are beginning to be used by some major companies in the construction industry, including Home Depot, which uses blockchain powered smart contracts to resolve vendor disputes.

As the pandemic has revealed, the supply chains we all rely on are remarkably delicate and vulnerable to disruption.

With blockchain, users at every stage of the global supply chain have access to a shared, encrypted, and comprehensive database that traces the precise path of every single transaction, from the moment an asset leaves the warehouse to when it arrives at its intended destination. 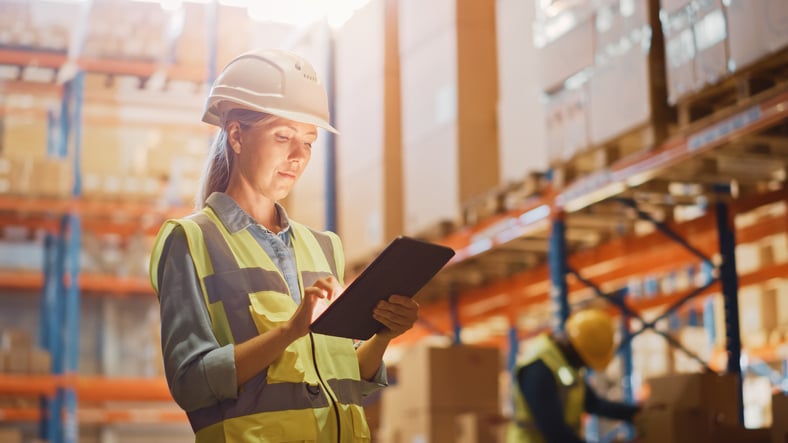 In a blockchain powered supply chain, it’s much easier to coordinate deliveries and trace breakdowns to their source, a capability that’s especially important in an industry as complicated as construction.

Smart inventory management is equally critical to the success of any construction business.

Nothing drives this home more than the revelation that theft of tools and equipment from jobsites costs the construction industry an estimated $1 billion per year.

Our free One-Key™ app empowers users to track the physical locations of their tools with Bluetooth while also providing a clean and easy-to-use digital dashboard from which you can manage and customize your inventory.

Blockchain can enhance your inventory management game even further via the same mechanisms that make it such a good fit for supply chain management: The shared digital ledger of the blockchain creates a transparent and unfalsifiable record of who was responsible for what tool, when, and where. With blockchain, inventory management can become faster and more efficient while also instilling greater accountability in your organization.

Blockchain and the Internet of Things

From here, it’s not difficult to imagine the benefits of a more intimate combination of blockchain with the Internet of Things.

A recent partnership between IBM and the Norwegian Seafood Association has showcased the unique ability of a blockchain enabled IoT to improve traceability and quality assurance in the seafood supply chain. When scanned, QR codes interspersed throughout salmon farms reveal the detailed histories of the fish, all of which is securely stored and encoded within IBM’s blockchain platform.

Though such IoT applications are not yet widespread, interconnected “smart” tools and equipment embedded with QR, NFC, RFID, and Bluetooth Tracking Tags may someday be automatically and securely aggregated en masse on sophisticated “smart” blockchains tailored for use by construction technologists and project managers.

With BIM, every member of a construction team has the ability to access and interact with an immersive virtual model of a building project. The BIM file changes over time as the building project unfolds from one stage of its lifecycle to the next. 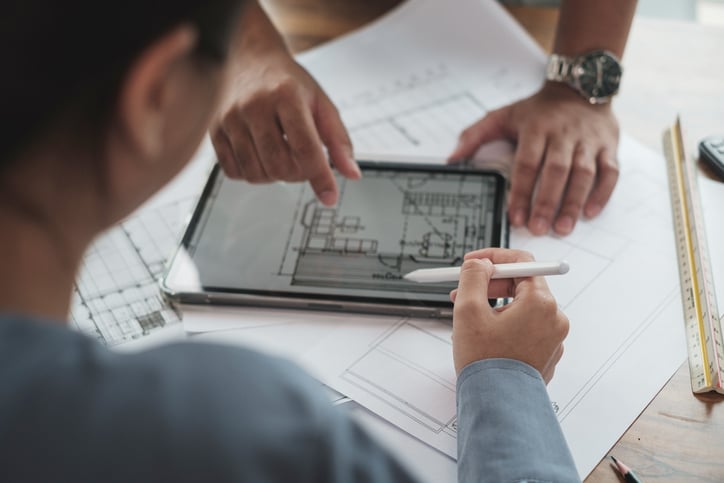 If combined with a permissioned blockchain, all parties can rest easy in the knowledge that everyone has the exact same BIM file and that the model is impenetrable to attack by unauthorized personnel. Anytime a project deliverable is completed or a benchmark cleared, the blockchain will encode the changes in real-time, capturing how a project gradually progresses from virtual to physical space.

Smart cities are a tantalizing glimmer on the horizon but these technological metropolises are plagued with issues related to information security and privacy. Critics deride smart cities as dystopian enclaves of the ultrawealthy, where Artificial Intelligence, IoT sensors, and centrally managed data banks are used to surveil residents and control outcomes.

Blockchain can smooth over some of these pitfalls and democratize information by layering a transparent, “trustless”, and decentralized accountability structure into the digital fabric of the smart city. With blockchain, any data collected by the city’s IoT fixtures could be made immediately available to every single resident with an internet connection. Legislation could be encoded as smart contracts while resource distribution and city services could be tracked in real-time from beginning to end.

The city of Dubai in the United Arab Emirates is already beginning to explore this arena and has set its sights on becoming the “first city fully powered by blockchain.”

Blockchain is not without its pitfalls.

The proof-of-work process in the permissionless blockchains behind cryptocurrency mining is extremely damaging to the environment, eating up more electricity than entire nations. In the context of the global climate crisis, this is a gravely serious problem that we cannot afford to ignore.

What’s more, the much-hyped unbreakability of blockchain’s decentralized cryptographic structure often distorts the well-documented history of predatory scams and hacks that has plagued this technology since its very beginning.

On the other hand, we’ve already seen how different types of blockchains can be designed to mitigate these concerns. Construction-grade permissioned blockchains may have the advantage of being leaner and more secure than their mainstream counterparts. These smaller, privately managed blockchains would run on pure consensus between trusted nodes, and wouldn’t require the energy-intensive proof-of-work process that makes most “trustless” crypto-blockchains so harmful to the environment.

One thing’s for sure: Blockchain is still a young technology that, if used ethically, has the potential to dramatically enhance the speed, efficiency, and security of the construction industry’s burgeoning digital landscape.

Rent Prices Are Falling the Fastest in These 5 U.S. Cities

Tue Sep 20 , 2022
Rental expenses are historically higher across the U.S., but as the housing market place resets, rates for one particular-bedroom residences are falling in a handful of cooling metros. Whilst metropolitan areas like Fresno, Tulsa, and New York City are still recording steep increases in just one-bed room rental rates, renters […]